Learn the tricks to master the art of learning synonyms and antonyms.
Rate Us
Views:40400

Instant Access to Free Material
Competitive exams feature a lot of questions on vocabulary, especially on synonyms and antonyms. So how do we learn these synonyms and antonyms without being haunted by the huge world of words?
Imagine how monotonous the world would be if there were only a word to describe particular thoughts. If everything is expressed only by a single word in every situation, life would be boring. Luckily, we have synonyms and antonyms to add flavor to our communication skills.

Synonyms are those words that have the same or very similar meaning.
For example:
Suggested Action:
FREE Live Master Classes by our Star Faculty with 20+ years of experience.Register Now
Weak, Fragile, Flimsy, faint- All mean less energetic
Fast, prompt, quick, hurry -All mean in a fast pace
Rich, wealthy, affluent, well-off –All mean rich class people
The list could go on but important point to consider here is the usage part or contextual meaning. For example, the synonyms for something big are – huge, large, elder etc.
Now, if we have to use it in a sentence where we are talking about a brother, we would write:
Meet my elder brother (It can’t be huge brother or large brother).
Similarly, If we say 'My license has expired'. We can’t say that 'my license is dead', whereas words 'expired' and 'dead' are synonyms and can be replaced with each other in this sentence,‘My grandmother has expired/ My grandmother is dead’.
Here’s how the usage of synonyms play a vital role.

Antonyms are words that have opposite meanings.
For example: Big- Small
Open- Close
True- False (it cannot be ‘wrong’ as it is opposite to ‘right’ though logically it is also correct)
Male-Female (it cannot be ‘woman’ as it will be opposite to the word ‘man’ though logically it is correct )
Again, while using antonyms, always keep in mind the context of the word and then choose the best word that means the opposite.

In logical association, we will logically associate words .
For example: look at the word – speak.

In word families, we write the synonyms of the word at one place, and antonyms at the opposite.
For example, let us look at the words - Abundance and Poverty. 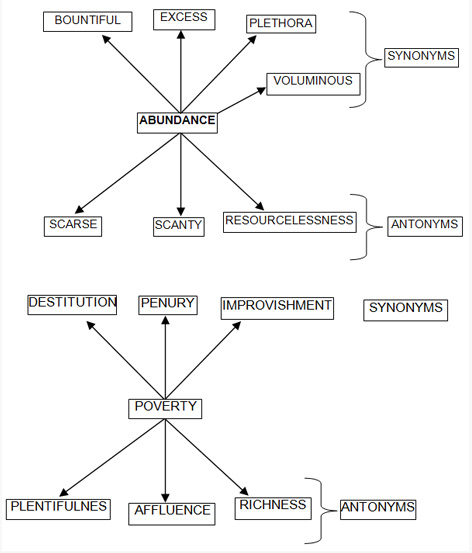 The other tricks to learn vocabulary can also be applied to learn antonyms and synonyms.